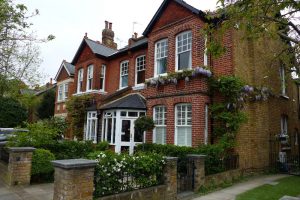 So many neighbourhoods in some of London’s most prestigious areas have remained true to their Georgian or Victorian architectural roots.  A great testament to the quality, durability, and appeal of these particular period forms.  Often, these two styles of properties are referred to collectively as ‘period’ or ‘classical’ homes which encourages us to presume that these two styles of architecture are pretty much the same. Whilst it is true that Georgian and Victorian styles share various design features, each style represents a different period in architecture and a different time in society, ensuring some unmistakable differences between them.

We take a closer look to find out exactly what the differences between Georgian and Victorian houses are, so we can fully appreciate their beauty.

Aptly named after the period in history that saw the reign of four British monarchs of the House of Hanover – George I, George II, George III, and George IV.  Generally speaking, Georgian properties tend to boast quite plain, uncomplicated frontages that were often built with brick and stone, sash windows, and symmetry at the core of the design.  10 Downing Street is a great example of Georgian architecture and probably the most famous Georgian house in London!   The Georgian period covers over 100 years (namely the 18th century) so, it is not really a style but an era within which we witnessed architecture and interior design develop in leaps and bounds, from very simplistic designs in the early 1700s through to the more intricate features (such as ornate iron railings), associated with the latter years ruled with King George IV at the helm.

The 18th Century was a time of great urban growth and settlement within British towns which meant that there was a need to accommodate more people into one household.  Townhouses were a great solution to this predicament and have become the building type most characterised by the Georgian era.

Georgian architecture still remains popular today with an increasing number of homeowners opting for the styles and traditions born within the Georgian era.

What are the characteristics of a Georgian house?

The Victorian era covered the period of Queen Victoria’s reign from 1837 – 1901.  It was during this time that the UK began to really feel the effects of the industrial revolution as its large towns and cities saw a rapid rise in industrialisation and therefore, housing, as the population moved in search of work.  Contrary to popular belief, terraced housing was commonplace before the Victorian era, with many Georgian properties in London built within a terrace.  However, the industrial revolution saw a boom in terraced properties, mainly due to the fact that they could be erected quickly and cheaply, and close to factories for workers to live in.

The arrival of the industrial revolution also meant that homes were no longer reserved for the wealthy and the elite, instead homes were becoming more accessible and less ostentatious.  Whilst Victorian properties do often retain some of the features introduced by the Georgians, such as a balanced exterior and sash windows, the Victoria era also inherited styles from the Gothic revival architectural movement which really make them stand out from Georgian properties.

The beginning of the Victorian era began with simple plain brick (or stucco) and sash windows, but as the time progressed red brick and terracotta became more favourable.  The industrial revolution also introduced new building materials such as iron and glass which made it possible to enhance the properties with more decorative, Gothic styled features.  These Gothic features are really what identifies a building as Victorian – lancet (pointed) windows, porches, dormers and pointed roofs that are sometimes decorated with a wooden trim that hangs from the edges are all unmistakable Victorian traits.

Inside, you will find high ceilings and large windows, narrow hallways and a simple two up, two down floor plans.

What are the characteristics of a Victorian property?

Because housing became more accessible to middle and lower classes during the Victorian era, adding decorative features to a property became a way for the upper class (and the elite) to showcase their wealth; the more elaborate the design details on a property, the more wealthy it’s owner was considered.

So, there you have it.  The Georgian and Victorian eras share some simplistic design styles but the culture changes resulting from the advancements of the industrial revolution, combined with the influence of the Gothic revival movement, saw Victorian housing boasting some unique features of its own.   Here at Parsons Joinery we specialise in restoring and adding authentic appeal to period properties with sash windows.  If we can help in anyway, just give us a call.  We’d love to help.